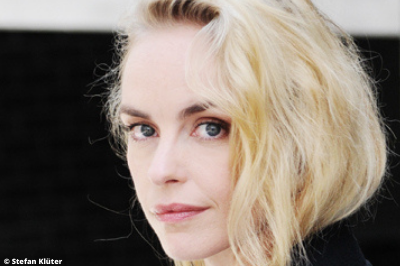 Born in Stuttgart in 1975, Nina Hoss studied at the Ernst Busch Academy of Dramatic Arts in Berlin. Until 2013 she performs at the Deutsches Theater. In 2014 she joins the Berliner Schaubühne, where she will appear in “Die kleinen Füchse” under the direction of Thomas Ostermeier, as well as in “Bella Figura” by Yasmina Reza and “Retour à Reims”, a monologue by Didier Eribon, which will be performed in 2017. Nina Hoss not only shines on German theater stages, she is especially known for her distinctive roles in film and television. In 2007 she received a Silver Bear at the Berlinale for her role in Christian Petzold’s ” Yella”. The two then made several films together: ” Jerichow” (2009), ” Barbara” (Silver Bear at the Berlinale 2012) and “Phoenix” (2014). Nina Hoss also plays alongside Philip Seymour Hoffman in “A Most Wanted Man” by Anton Corbijn, together with Stellan Skarsgård in “Return to Montauk” by Volker Schlöndorff, in “Pelican Blood” by Katrin Gebbe and in “The Prelude” by Ina Weisse. For the leading role in this film Nina Hoss was awarded as best actress at the film festivals of San Sebastian and Stockholm 2019. At this year’s Berlinale, “Schwesterlein” (directed by Stéphanie Chuat and Véronique Reymond) celebrated its world premiere. This year, it was sent from Switzerland into the race for a foreign Oscar. In the American television series “Homeland” she plays the recurring role of Astrid. Most recently she shot the series “Shadowplay” alongside Michael C. Hall. Nina Hoss was a member of the juries at the film festivals of Locarno, Berlin and Venice. In the course of her career, Nina Hoss has received numerous awards, including the Adolf Grimme Prize (2003 and 2005), the Bavarian Television Prize (2005) and the German Film Prize (2008). In 2019 she received the Douglas Sirk Prize, which is awarded every three years for a special contribution to film culture. This year she received the Hannelore Elsner Prize. Nina Hoss is an Academy Member.